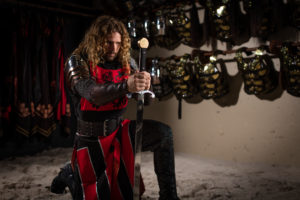 Silk, although extremely expensive, was readily available to wealthy people of consequence. Silks from Byzantine traded in Pavia by way of Venice, and silks from Andalusia reached France via Spain. In the last decade of the previous century, the Norman reconquest of Sicily and the First Crusade had opened additional routes for Eastern fabrics and style influences into Europe.

Despite the importing of new fabrics, wool remained the primary fabric for clothing of all classes. Linen undergarments, which were more comfortable against the skin and could be washed and then bleached in the sun, were increasingly worn.

Fur was worn as an inside lining for warmth. Vair, the fur of the squirrel, was particularly popular and is shown in many illuminated manuscript illustrations as a white and blue-grey softly striped or checkered pattern lining the mantles of the wealthy.

As in the previous centuries, two styles of dress existed side-by-side for men: a short (knee-length) costume deriving from a melding of the everyday dress of the later Roman Empire and the short tunics worn by the invading barbarians, and a long (ankle-length) costume descended from the clothing of the Roman upper classes and influenced by Byzantine dress.

Underclothes consisted of an inner tunic (French chainse) or shirt with long, tight sleeves, and drawers or braies, usually of linen. Tailored cloth leggings, called chausses or hose, made as separate garments for each leg were often worn with the tunic. Striped hose were popular.

During this period, beginning with the middle and upper classes, hose became longer and more fitting, and they reached above the knees. Previously, they were looser and worn with drawers that ranged from knee- to ankle-length. The new type of hose was worn with drawers that reached the knees or above, and they were wide enough at the top to allow the drawers to be tucked into them. They were held up in place by being attached to the girdle of the drawers. 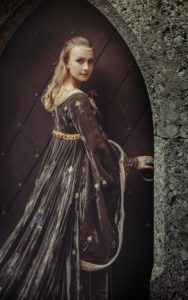 Women’s clothing consisted of an undertunic called a chemise, chainse or smock. This was usually made of linen. Over the chemise, women wore one or more ankle-to-floor length tunics (also called gowns or kirtles). Working class women wore ankle-length tunics belted at the waist.

Women of the French court wore a loosely fitted tunic called a cotte or the form-fitting bliaut over a full chemise with tight sleeves. The bliaut had a flaring skirt and sleeves tight to the elbow and then widening to wrist in a trumpet shape. A bliaut, apparently cut in one piece from neckline to hem, depicted on a column figure of a woman at the Cathedral of St. Maurice at Angers has visible side lacing and is belted at the natural waistline. A new fashion, the bliaut girone, arose in mid-century: This gown is cut in two pieces, a fitted upper portion with a finely pleated skirt attached to a low waistband.

The fitted bliaut was sometimes worn with a long belt or cincture (in French, ceinture) that looped around a slightly raised waist and was knotted over the abdomen. The cincture could have decorative tassels or metal tags at the ends. In England, the fashionable gown was wide at the wrist but without the trumpet-shaped flare from the elbow seen in France.

Married women, in keeping with Christian custom, wore veils over their hair, which was often parted in the center and hung down in long braids that might be extended with false hair or purchased hair from the dead, a habit decried by moralists.

The shoes they wore were designed for castle wear only and made of silk, velvet, cloth or leather and fastened with a buckle. The indoor shoes were covered with wooden and leather outdoor overshoes.

The better fit and girdle attachment of this new hose eliminated the need for the leg bands often worn with earlier hose. In England, however, leg bands continued to be worn by some people, both rich and poor, right up to the reign of Richard I. After 1200, they were largely abandoned.

Men of the upper classes often went hatless. However, rural lower classes had a few hats to choose from. The chaperon in the form of hood and attached shoulder-length cape was worn during this period, especially by the rural lower classes, and the fitted linen coif tied under the chin appeared very late in the century. Small, round or slightly conical caps with rolled brims were worn, and straw hats were worn for outdoor work in summer.