Other entertainers would come through as well, including jugglers, acrobats and those with trained animals. These were the early origins of traveling circuses. Traveling puppet shows were common as well.

Card, dice and guessing games were popular. The noble classes began to play new games like chess and backgammon that were brought back from the Orient during this period.

Vikings swept in from the north to England, Scotland, Denmark, Germany and northern Gaul.

Musical Form describes the organization of sound. A template or blueprint supplies us with the outline necessary to complete a document or build a house. Composers use form to build a song. Form is a musical blueprint that helps the composer put his sounds together in different ways. The song can be simple or complicated depending on the choices the composer makes.

Form is not limited to something that we see with our eyes. We can also hear forms with our ears. When you are able to hear patterns in music, you are beginning to understand form.

One of the most popular musical forms during The Middle Ages was the rondo, which is based the French poetry form called Rondeau. The French poetry style features a quintet, a quatrain and a sestet.

Chalumeau: A simple rustic reed pipe, an ancestor of the clarinet, with 6 to 8 finger holes. Very similar in design to the Pocket Clarinet.

Dulcimer: A shallow, closed box over which are stretched wires to be struck with 2 wooden hammers held in the player’s hands.

Flute: A woodwind instrument of ancient origin formerly made of wood. From Medieval times two methods of producing sound were used: blowing across a round mouth hole as on the panpipes (side blown) flute, or blowing into a whistle mouthpiece (end blown) as on the recorder.

Harp: The Harp can be simply described as an open frame over which is stretched a graduated series of strings, which are vibrated by plucking with the fingers.

Lute: A fretted stringed instrument played by plucking with fingers. The lute has a round body, like a halved pear, a flat neck with seven or more frets, and a separate pegbox usually bent back from the neck at an angle. 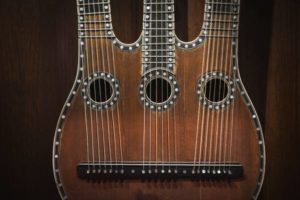 Lyre: An ancient Greek instrument, like a small harp in which strings were fixed to a cross-bar between two arms and plucked by fingers or plectrum.

Mandolin: A plucked instrument of the lute family, usually with 8 strings tuned in pairs and played with a plectrum, generally in a sustained tremolo.

Pan Pipes: An ancestor of the flute, this instrument is a series (usually four to twelve) of short vertical pipes of wood, cane or pottery fixed side by side and graduated in length to give the pitches of the different notes. The player blows across the open ends.

Recorder: A woodwind instrument of ancient lineage, made without a reed. The recorder is the forerunner of the flute, but is end blown through a whistle mouthpiece. It has seven finger holes in front and one thumb hole behind, and a beak shaped mouthpiece.

A rondo using the AABBA format found in Rondeau.In Flanders fields the poppies blow
Between the crosses, row on row,
That mark our place, and in the sky,
The larks, still bravely singing, fly,
Scarce heard amid the guns below.
We are the dead; short days ago
We lived, felt dawn, saw sunset glow,
Loved and were loved, and now we lie
In Flanders fields.

Take up our quarrel with the foe!
To you from failing hands we throw
The torch; be yours to hold it high!
If ye break faith with us who die
We shall not sleep, though poppies grow
In Flanders fields.