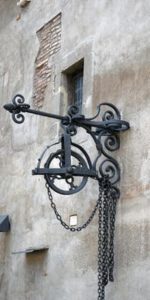 The pulley is a simple machine made of a wheel with a rope or belt wrapped around it. It is used to lift things up. When you pull down on one end of the rope, the other end moves upward like on a flagpole or crane.

In the Medieval Era, pulleys were used for retrieving water from wells, hauling heavy bags up to the castle doors, and even lifting knights up onto their horses.

A lever is a stiff rod that rotates around a pivot point. Downward motion at one end results in upward motion at the other end like a seesaw. Depending on where the pivot point, called the fulcrum, is located, a lever can multiply either the force applied or the distance over which the force is applied.

Gears are wheels with teeth. You can use gears to slow things down or speed them up, to change direction or to control several things at once.

Gears were especially important in the medieval period as they helped to create a winch. The winch, a crank used to give motion to a grindstone or similar device, allowed a person to put a great deal of energy into a device like a catapult. At a prescribed moment, all the energy is released at once, hurling the projectile within the catapult. 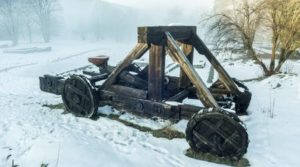 There are several different technologies that fall into the “catapult” category. They include the catapult, the ballista and the trebuchet.

Catapults were used as a powerful weapon in the Medieval Era to break down the walls of castles. A heavy object would be placed on one side, and a group of men or a counterweight would pull down the lever on the other side, which would launch the object.