Everyday peasants could be educated and marry if they could afford it. Serfs, however, could do neither and were not permitted to relocate with out the lord’s approval.

Farmers were a bit better off than peasants, as some owned their own farms. Most worked the farm lands themselves or with the aid of peasants and serfs.

Farmers and peasants lived in simple dwellings called cottages. They built their own homes from wood and the roofs were thatched (made of bundles of reeds that have to be replaced periodically). The interior walls were generally made of wattle and daub – an arrangement of twigs weaved into a wall shape and coated with mud and straw to make a hard, plaster-like surface to keep out drafts. Often farmers, peasants and serfs brought their animals into their homes to protect them.

Carpenters were highly skilled and considered to be elite tradesmen. To become a carpenter, it was usually necessary to join a guild as an apprentice and learn the craft. A knowledge of math, woodworking and the use of tools was required for all carpenters.

Queen and nobles often sought the finest carpenters and kept them retained on their staffs as specialists. Furnishing castles and estates was not only done for decorative purposes, but also to demonstrate prestige and status to visitors. Thus, a master carpenter was always in demand and could earn high wages.

The metalsmith, sometimes called blacksmith, had to first make his tools before he could make metal parts such as horseshoes, nails and door hinges.

The blacksmith would also work as an armorer for the queen or count – making swords, shields and armor.

Civilizations of The Middle Ages 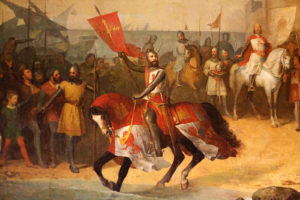 The Roman Empire was in decline and being invaded by many tribes in the third, fourth and fifth centuries. These tribes waged battles and war to establish new territories and kingdoms, where the leaders were always heroes of battles for land.

New waves of invasions took place in the early ninth century by tribes not previously known to invade European lands. Below is a list of the eight key tribes of the period.

Angles, Saxons, Jutes and Frisians invaded England. This is the root of the term Anglo-Saxon, which is often used to describe English peoples.

Arabs and Saracens invaded from the south settling in Spain, Italy, Portugal and southern Gaul (France).

Danes invaded England and settled in the northeast of the country.

Goths, whom were called barbarians by the Romans, invaded Italy and Gaul.

Normans were the descendants of Vikings and their western European colonies. They invaded and captured England in 1066, eventually expanding to Italy, Sicily and the Holy Land.

In the medieval era, most people had only a given name, such as John. To help differentiate, some were also known by the manor in which they resided – John became John of Cornwall Manor. This would then be added to by things such as trade – Edward the Metalsmith, Marcus the Carpenter or Jacob the Miller.

Over the centuries these turned into the last names of today (just drop “the”). In this vein, if John had a son Charles, he might be know as Charles, John’s son (later known as Charles Johnson).

Hierarchy: Categorization of a group of people according to ability or status.

Serf: A member of the lowest feudal class, attached to the land owned by a lord and required to perform labor in return for certain legal or customary rights.