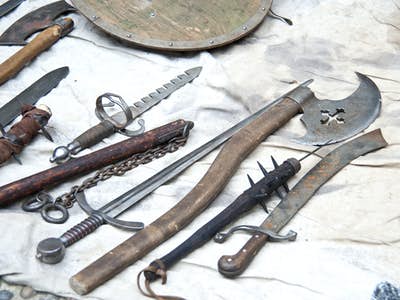 Caltrop: Multi-pointed metal spikes that were scattered in the path of invaders in order to slow the enemy when soldiers or their horses stepped on them.

Crossbow: Became popular after 1100 B.C. as a long-range weapon similar to a bow and arrow, but easier to conceal. The crossbow fired metal bolts (small arrows) with great force, and had the advantage of being able to carry more bolts than one could when using a bow.

Dagger: Two-sided blade. Daggers were common to most soldiers and varied from simple to elegant. Most often daggers were used for close combat when the fighter’s sword was lost.

Glaive: A kind of spear with a single-edge blade. Glaives were used by knights and foot soldiers to kill and maim at a greater distance than the victim could defend. Not good in close quarters.

Gunpowder: This strange and powerful new technology was introduced to Europe around 1250.Invented by the Chinese much earlier, gunpowder was brought back and used with poor success until it was better understood. Eventually Europeans learned more about gunpowder leading to powerful new weapons such as guns, bombs and cannons.

Knives: Smaller than a dagger and usually having only a single-edge blade, knives were used primarily as a tool for eating, cutting and repairing. Knives were used as a weapon in place of a dagger only by the poorest of citizens.

Lance: Used by knights on horseback. Largely ceremonial version of a spear used during jousting tournaments.

Longbow and Arrows: Long range offensive weapon system that was highly accurate in skilled hands.The longbow was used to fire arrows for killing; arrows with tips dipped in poison to ensure death and arrows with flaming tips in order to set fire to distant objects. Soldiers who used this as a weapon were called longbowmen or archers. 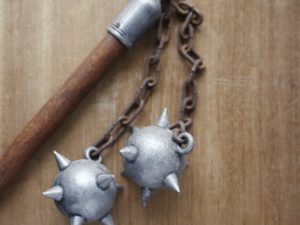 Murder Holes: Were windows or special holes in walls or gates that were used by defenders inside the castle to pour sewage, hot water, oil or burning tar on those below.

Sword: Medieval swords almost always had a double-edged blade to enable cutting action on the backswing. Swords came in many varieties such as sabers, broadswords and claymores. 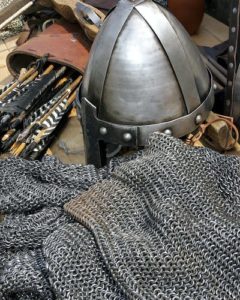 Shields: Used to protect the fighter from attack. When soldiers used shields collectively they could make a wall that would protect against a cavalry.

Suits of Armor: Introduced in the 14th century, suits of armor were expensive. The effective body shielding was tailor-made by a metalsmith to the intended wearer. Armor originally began as metal helmets and shields. Later, steel plates to cover the chest were added. Over time, the full head-to-toe suit or armor was developed. Suits were heavy, hot and awkward to wear. Much training had to be done on and off the horse in order to be a masterful warrior in combat while wearing a suit of armor. Horses also had to become used to the added weight.