Get Early Access to an Exclusive Spring Break Deal!

Be the first to get the deal by signing up.

The #1 dinner attraction in North America

Travel through the mists of time to a forgotten age and a tale of devotion, courage and love—at Medieval Times Dinner & Tournament. Imagine the pageantry and excitement that would have been yours as a guest of the queen ten centuries ago. That’s exactly what you will experience at North America’s most popular dinner attraction. See our electrifying show featuring heroic knights on spirited horses displaying the astounding athletic feats and thrilling swordplay that have become hallmarks of this unique entertainment experience. Enjoy a “hands-on” feast as the dynamic performance unfolds before you. A sweeping musical score and brilliant lights provide a fabulous backdrop for this spellbinding experience that blurs the boundary between fairy tale and spectacle!

Capturing the imagination of all ages.

Medieval Times is based upon authentic Medieval history and is the true story of a noble family with documentation dating back to the 11th Century. Medieval Times began with two dinner/ entertainment complexes located in Majorca and Benidorm, Spain. The first North American Castle in Kissimmee, Florida opened in December 1983. Medieval Times’ Castles have since entertained more than 60 million guests.

Our valued team is fueled by the passion to provide our guests with genuine hospitality and exciting entertainment. It is our honor and privilege to care for our animals and to be good corporate citizens in our communities. 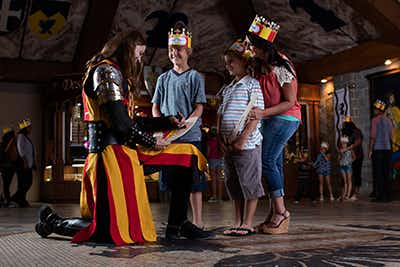 In the Hall of Arms, guests can admire the elaborate Medieval décor. There are coats of arms for many prestigious families and a spectacular array of Medieval weaponry; as well as a Museum of Torture, which features reproductions of torture instruments used during the Middle Ages. 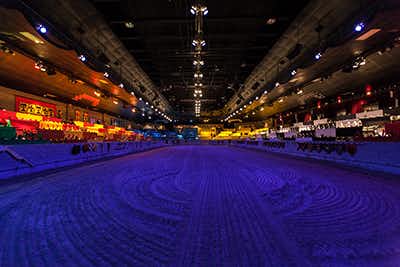 As the festivities begin, trumpeters herald the guests into the Grand Ceremonial Arena where they are seated in one of the six color-coded sections corresponding to the colors of one of the daring Knights. Serfs and wenches attend to every need of the guests who feast on a four-course dinner in true Medieval, pre-silverware fashion. 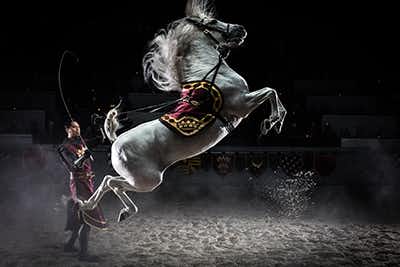 The arena quickly fills with the thunder of hooves as the Queen of Arms lends the cast through a spectacular display of equestrian skills and Medieval pageantry. The pace quickens as the Tournament of Games begins. The valiant Knights on horseback face their competition in games of skill, such as the ring pierce, flag toss, and javelin throw. 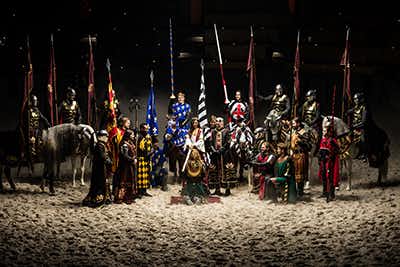 The experience culminates as trumpeters summon the Knights of the Realm for the Tournament Royal. Guests join in the revelry and fun as they cheer their own Knight to victory in authentic jousting matches and dangerous sword fights. Following the evening’s final show, guests have the opportunity to receive autographs and mingle with cast members in the Hall of Arms.
Learn More About Our Show

All dates, times, tickets and promotions are different per castle. Please choose which castle you will be visiting in order to see the most up to date information!