Buttresses are the extra thick part of the outer walls that assist in strengthening the structure.

Towers and keeps were tall and square and enabled long distance surveillance. Originally the corners were square, but later designs were rounded or cylindrical. Squared corners were more vulnerable to damage by projectiles like boulders from catapults. 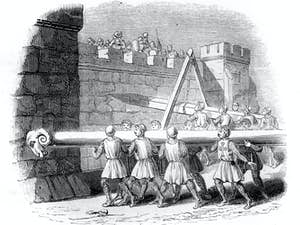 Narrow slit windows were slim on the inside, but flared wider on the outside. This made it difficult for the enemy to hit the defenders, but enabled those inside with a wider range of motion for attacking the enemy.

The fore building was the gateway into the castle. It was usually positioned forward from the castle, on higher ground or up stairs from ground level making it more difficult to gain entry. Gateways were protected with a massive iron gate, a heavy wooden door or both.

Murder Holes: were windows or special holes in walls or gates that were used by defenders inside the castle to pour sewage, hot water, oil or burning tar on those below.